The Wearable Technology art, an art form linked to the Wearables with an infinite journey.

The Wearable is nothing new. Like most technologies and products that at any given time emerge and eventually end forming part of our lives at almost dependent manner, for years they have lain dormant since its first version, and they have waited for the right time to make the jump to the first line, once generated the need in society. In other cases, they have gradually evolved continuously. This is the case of the first digital wristwatch, which born in the 70s designed by the American manufacturer Hamilton Watch Company, although the same company had already designed a previously in 1968 for the film “2001: A Space Odyssey” Stanley Kubrick. A hint of what a few years later would be one of the gadgets that have never stopped evolving and with the passage of time has even changed its name to Smartwach, a device which if it was designed to mark the time, it has a use in fields of health, welfare, sports, entertainment, and even for industrial or military purposes.

This is a very simple example of Wearable, right? But things get complicated if the Wearable, which inherently is associated with technology, is mixed with the creativity of artists to shape products that go beyond the own usability of the device, resulting in a new and innovative artistic discipline, the Wearable Technology art, an art form linked to the Wearables with an infinite journey. This will be the main topic of the 11th edition of the International Conferences on Art and Technology which Technarte organizes in Bilbao the next 19th and 20th of May. 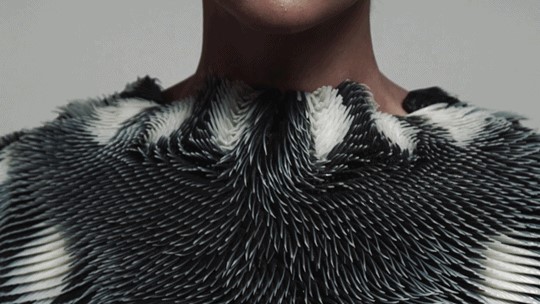 There is a very fine line between wearable with a specific function that solves us a particular need and wearable just conceived as an extension of our own body and in the same way our skin reacts to the environment, expands, contracts and changes its shape according to different stimuli. The wearable is also sensitive to certain impulses, as if it were a second skin.

This is the case of Caress of the Gaze among others. It is a printed digitally artificial skin which meets the gaze of people and makes us to think about different concepts like intimacy, sex or personal identities. The Iranian architect and interactive designer Behnaz Farahi, who currently lives in US, works with these concepts in order to improve the relationship between human beings and the environment through the design inspired by natural systems. With Synapse she manages to develop a 3D printed wearable which moves and changes of shape in response to brain activity. The main objective of this art project is to explore the possibilities offered by 3D printing with different materials in order to produce a changing structure as if it were a second skin.

On May 20th, the day dedicated to Wearable Technology Art, Behnaz Farahi, along with Neil Leach, one of the most important international theorists in architecture and digital design, and will discuss the present and future of Wearable Tech applied to the world of art and other areas of society.

Among other projects, the Spanish artist Maria Castellanos will show her Enviroment Dress project, a smart dress designed with Alberto Valverde. Both artists and researchers work at the University of Vigo, capturing environmental data to measure the aggressiveness around us in our daily lives and analyzing how it affects the mood and behavior of people. This dress, which moves in the edge of the world of fashion, art and technological development, is formed in turn by sensors that analyze issues such as noise variations, temperature, atmospheric pressure, ultraviolet radiation, or amount of carbon monoxide carbon surrounding the normal life of a person.

3D printing has opened up a huge range of creative possibilities and production both in form and use of materials. Everything around the so-called Smart Materials will be another issue to be approached in the new edition of Technarte. The ability of these new materials to be altered through external stimuli such as temperature, stress or electromagnetic pulses, represent certainly a revolution in the production processes of areas such as fashion, architecture and even the industry.

Establishing a parallel with the humans´ need to migrate or seek refuge in new cities and countries, the Japanese artist Aki Inomata devised Why Not Hand Over a “Shelter” to Hermit Crabs? an art project in which the wearable delves into the animal world offering hermit crabs the possibility of moving carapaces design inspired by cities like Bangkok or New York and printed through 3D printing technology.

Through 3D scanning technology, the Japanese artist designs adapted shells within shells abandoned by crabs, creating new specific definitions to each of the mollusc shells.

Aki Inomata will be one of the artists who will tell us in Technarte Bilbao the present and the future of Wearables and its application in the world of art. Of course, the tickets for the 11th edition of the Conference on Art and Technology organized by Technarte are already available.