Redefining the future of cities

The urban landscape is suffering a vertiginous transformation, in which the citizens have stopped being a passive entity that now interact directly with its environment, changing thus in an active way these new urban landscaped. This is one of the objectives of the interactive architecture, a new artistic discipline able to transform cities into living and changing organisms through the interaction of its inhabitants and the use of the new technologies. Building are not chuncks of fixed concrete anymore, now they breathe and interact with the stimulus of the people that inhabit them.

This innovative disciple has been present in all the past Technarte editions practically since its very beginning, with the presence of artists such as Andrew Shoben, from the British collective of Greyworld, the American architect Cameron McNall, Els Vermang from Belgium’s Architecture Laboratory, or the American artist Jennifer Steinkamp among others. In this new Technarte edition, Ruairi Glynn, one of the reference British artists of the world will show us the potential of the urban interactive design when creating interactive spaces between people, objects and environment through the display of different projects tackled during all his career.

In 2012, Ruairi Glyn exposed its Fearful Symmetry work in London’s  Tate Modern Turbine room. The work’s title comes from one of William Blake’s poems and the installation itself was inspired in part by the graphic description of the encounter with a creature from the night, turning the installation into an interactive gathering.

Ruairi is Bartlett School’s  Interactive architecture laboratory’s director in London,considered by the guardian as the world’s second most important architecture university only after Massachussett’s Technological Institute. Within the interactive architecture laboratory many technological projects related to architecture are developed and from this very place some of the most important future works are born as well. Thanks to its director they will show us some of the latests works born out of this laboratory, such as the impressive interactive myCup installation, a gigantic ball made of cups of plastic hanging in the hall of the American Merrill Lynch bank with the purpose of warning the employees of the bank about the importance of recycling plastic and being more environmentally friendly. 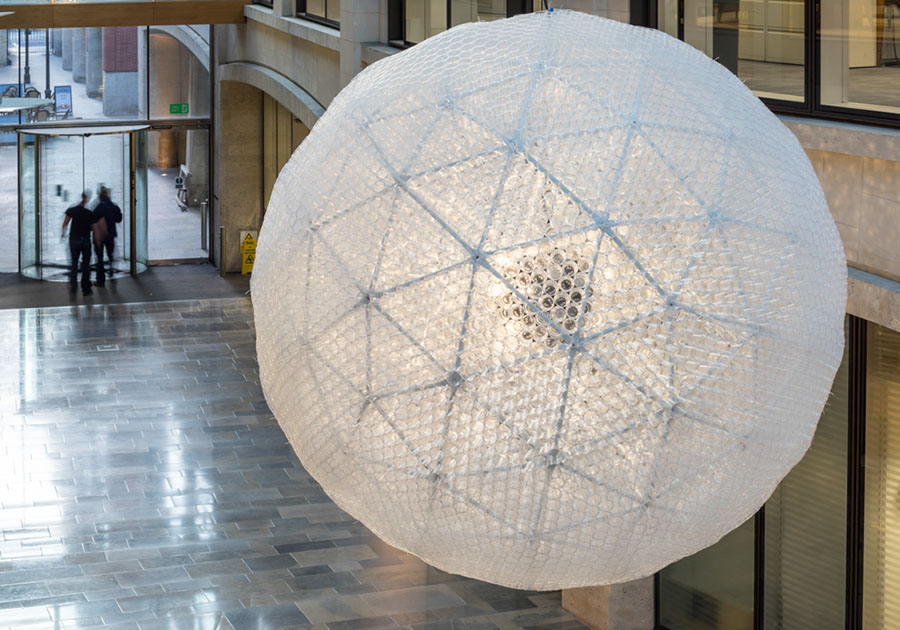 The ball’s illumination, formed by 8,000 plastic cups used the the offices of Merrill Lynch, offer a different visual richness during the different moments of the day, through a smartphone app that both works and visitors can use, configuring the hall’s illumination and creating thus  customized visual sensations.

A unique opportunity to know Ruairi Glynn and enjoy the rest of the attending international artists and professionals from the technology sciences of these two interesting dates where new projects, ideas and collaborations are born due to the intense networking present in them.

Do not hesitate and register in the new Technarte edition that will take place during the days 28-29 of May in Bizkaia Aretoa UPV-EHU in Bilbao.