PREDRAG K. NIKOLIC is an associate professor at the Cheung Kong School of Art and Design, Shantou University, in China. He is an interaction designer and an interactive media artist who holds a PhD in Digital Media. His research focuses on design for behavioral changes. He mixes experiential reality, AI and robot-robot interactions. His artistic and design focus is on interactive installations which have been exhibited world-wide such as SIGGRAPH, Singapore Science Center, Museum of Applied Art in Belgrade, Education Museum in Belgrade, Hong Kong – Shenzhen Design Biennial, Maison Shanghai etc.

Besides his academic, he also has a very dynamic digital media industry career through which he worked as a senior executive for Yahoo, Ogilvy Group, Grey Worldwide and J. Walter Thompson and lead online media initiatives for clients such as: CSA, IBM, Telenor, The Coca-Cola Company, Nestle, KRAFT, MARS, H&M, Credit Agricole Bank and many others. 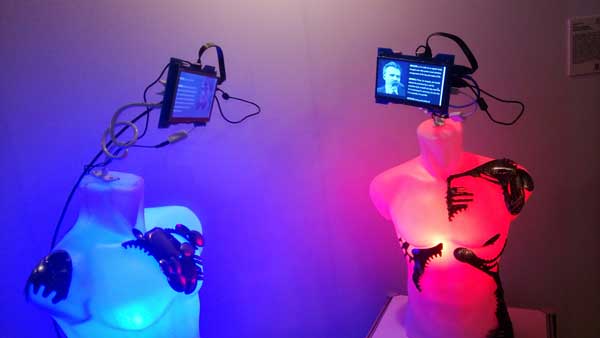 Syntropic Counterpoints: Art of AI Sense or Machine Made Context Art
In the project Syntropic Counterpoints, we are using discussions between Artifical Intelligence clones to generate creative content. Nevertheless, our focus is less on content analysis and more on the beauty of creation itself and given context by the machines. We are using a different recurrent neural network (RNN) and collective creativity approaches to support interactions between Artifical Intelligence clones and trigger a humanless creative process which should lead to unsupervised robot creativity. The robots are trained by using the publications of some of the greatest thinkers of their time such as Aristotle, Nietzsche, Machiavelli, SunTzu and confronted to the crucial questions related to humankind such as understanding of moral, aesthetic, ethic, strategy, politics etc. Throughout this robot-robot interaction model, we are trying to investigate the possibilities and consider limitations of using artificial intelligence in context-based creative processes as well as to raise questions related to potential future phenomena of machines mindfulness.