Patxi Araujo (Spain, 1967) is an artist and Professor at the department of art and technology of the Faculty of Arts at the University of the Basque Country UPV/EHU. He is experienced in the field of Fine Arts, where he applies his research in scenery, installations and events, and in immersive and interactive environments. He is also working with disciplines such as dance or robotics. He has made numerous individual and collective exhibitions, receiving awards and mentions in various competitions and international video art animation: the International Film and Video Festival, (Monterey, 2000) and L’Imagine Leggera, (Palermo, 2001), the International Image Festival of Manizales (Colombia, 2009) and the FILE -09 (Brazil), among others.

In his recent work explores the relationship between art, technology and poetry. This interest has given birth to Clarke’s 3rd Law (2008), a project that analyzes and recreates the territory of the techno-magic and Tears of Alice (2009), conceived as a meeting point of an aesthetic synaesthesia and hyperconnectivity. Soft_Wall (2010 -…) investigates the significant applications throughout the world mapping. He is currently developing the project Codex Contaminari_Humana Coded as an exercise of aesthetic criticism and creation around the concept of the human through bodies, perceptions and metaphors from environments of programming, robotics, artificial life and simulation.

The Trained Particles Circus proposes an improbable, precarious and potentially dangerous meeting place caged between the real and the virtual. It’s embodied in the relationship between synthetic biomechanics and an automaton, recreating the figure of the circus artist, the puppet with its own life or the fantastic animal. And it places us as spectators in a contemporary spectacle of hybrid and augmented subjects that weaves light and shadow, fake and magic, virtual and physical reality, machine and organism.

In a gloomy space or in total darkness, a hanging metal cage shelters the virtual and physical body of The Trained Particles Circus. The particles and their connections, dissected through a Pepper’s ghost in light and shadow, dance alongside an automaton which is composed of articulated rods and servos in an illusory common space. All its movements, images and sounds respond to the activity of a software entity submitted to interaction through attractors. 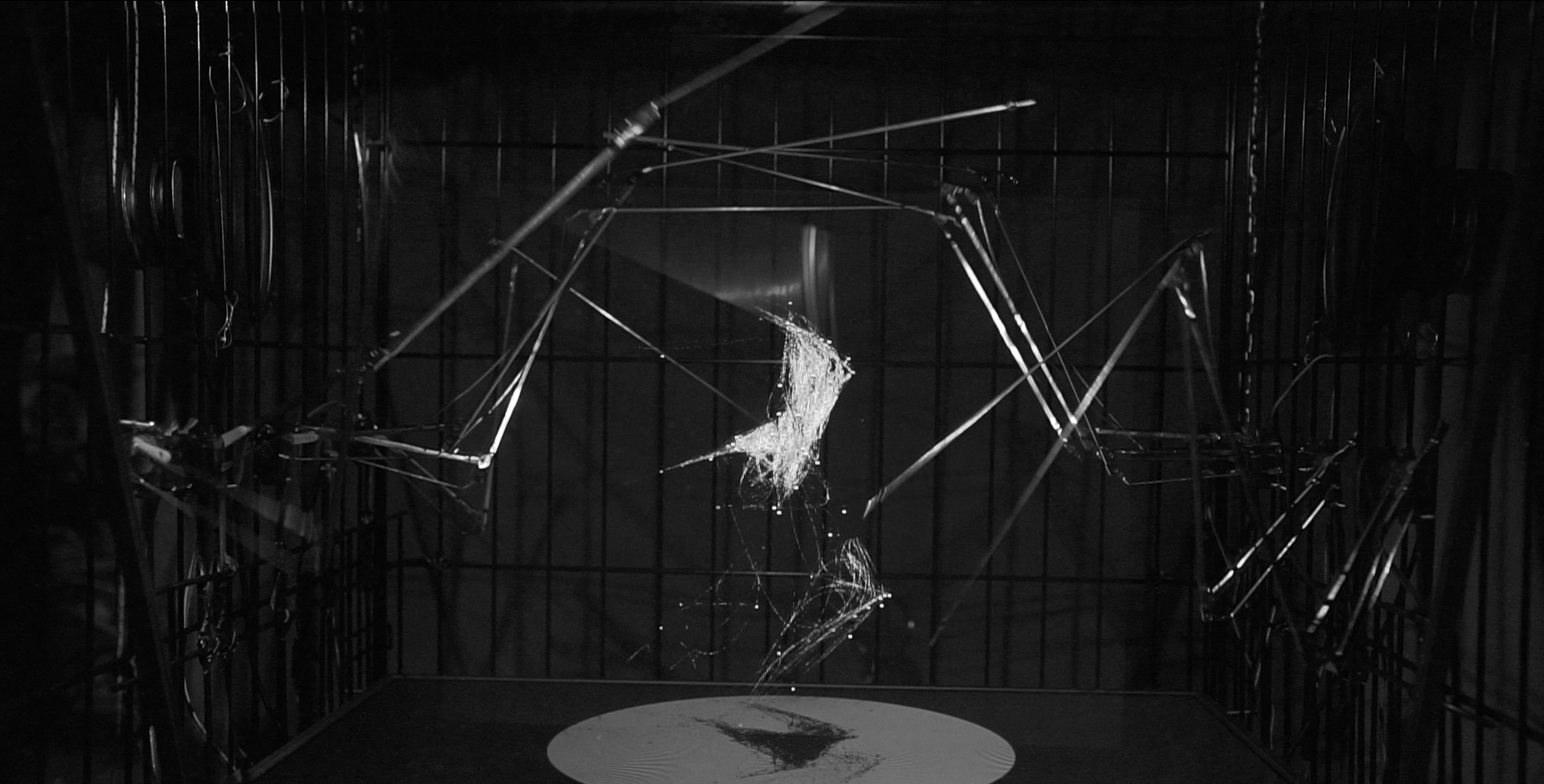