ESTHER PIZARRO (Madrid, 1967) has a doctor’s degree from the Complutense University of Madrid. Her interest in the city and in how humans move, percieve and identify urban spaces constitute the epicenter of the investigation. Mobility maps, cognitive cartographies, imagined topographies and arquitectural replacements that colonize daily objects are some of the series, which the artist is working on for the last fifteen years. His reflection about cartographical models derives in a comprehension of the body as a landscape and as topography. Her last installations explore the display of the complexity of the city: the mobility, the conectivity between cities, the polycentric urban systems and the conversion into data of urban profiles, among other topics.

She was awarded with the Pollock-Krasner New York Foundation scholarship, the Spanish Academy in Rome and the Spanish School (Colegio de España) in Paris. In the years 1996 and 1997 she lived in the United States thanks to the postgraduate scholarship of the Fullbright Commission and the Ministry of Education and Culture. She has exhibited both individually and collectively in Spain (Matadero, Madrid; San Pau Hospital and Asia House, Barcelona; San Telmo Museum in San Sebastián; Royal Mint of Segovia; Tomás y Valiente Art Center (CEART), Fuenlabrada; Barjola Museum of Gijón; the Fine Arts Circle of Madrid) and overseas (Spain Pavillion at the Biennale Arquitecture of Venice and the Spanish Culture Center of Lima, Peru). During the last years she has created several temporary installations and she has given speeches in public spaces, both for temporary and permanent programs, given for instance the Universal Exposition of Shangai, the International Exposition of Zaragoza, the Pradolongo Park in Madrid, the Exposition and Congress Palace of Merida and the West Lake Park in Hangzhou (China). Her work appears in numerous collections, such as the Academy of Rome, the Valencian Institute of Modern Art (IVAM), the Ministry of Foreign Affairs, the Ministry of Environment and the Caja Madrid Collection. 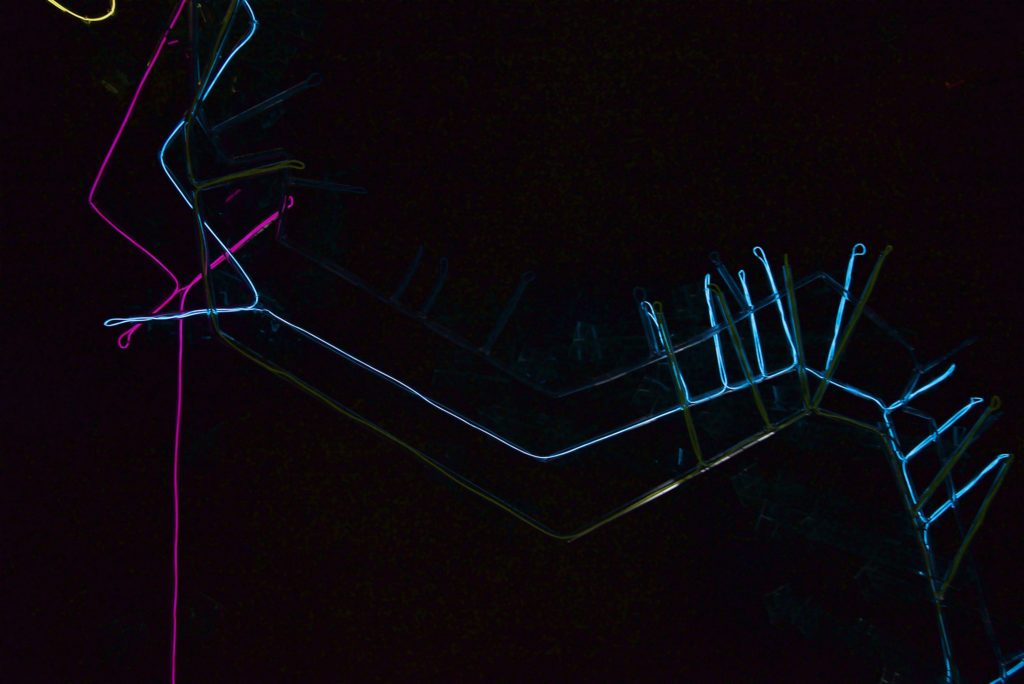 New Landscapes: Networks and Data the recent artistic and conceptual investigations of Esther are focused on how the Complexity Theory and complex thinking affect our way of understanding the new contemporary cities: multi-networked and data-constructed landscapes. The artist suggests a method capable of coding the language that is used there consisted of using tridimensional and multimedia instalative language.

Her recent project, Liquid Mapping :: connected to… represents the cartography of how Spanish Geography is connected to the rest of the planet through underwater cabling, the true information highways of the 21st century. The result is a big glass-tube system, through which electroluminiscent cables are placed, sorted by different colors that repesent the installation year. The blinking light interacts with an audio track in form resulting on light impulses (data emission). The whole is connected to a diagram that runs along the the complete vertical canvas of the room and shows the evolution of this liquid cartography in time (by years of activity) using light screens, lines and data.