DANIEL MILLER integrates robotics, media and electronics, exploring systems and ecologies. He currently works as an assistant professor of emerging technologies and sculpture at the School of Art & Art History of the University of Iowa. Previously, he worked as an adjunct associate professor at the art and technology department of the School of the Art Institute of Chicago (1997-2014). Some of his internatiotnal exhibitions include ISEA 2017 (Manizales, Colombia); ISEA 2016 (Hong Kong); iDEAS exhibition at International Digital Media Arts Association 2017 Conference (Washington, DC). and Tweak, Interactive Art & Live Electronic Music Festival (Limerick, Ireland). 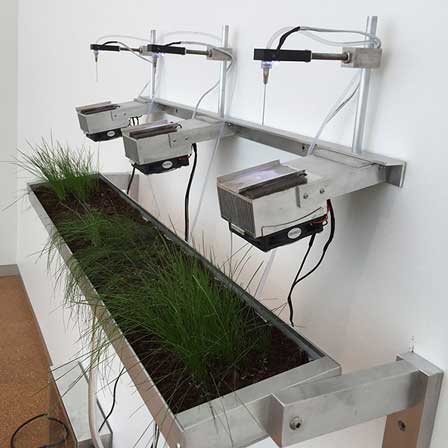 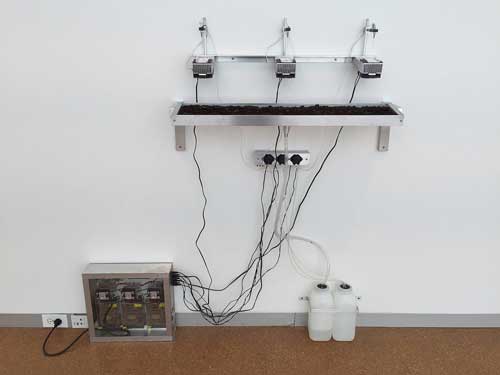 He was mentioned in Leonardo, “in::formation, The Aesthetic use of Machine Beings, Vol. 33, The Chicago Reader “Technically Brilliant” by Fred Camper, and the Information Arts, Intersections of Art, Science, and Technology, by Stephen Wilson, among others.   He was awarded with the Art and Humanities Initiative Grant of the University of Iowa (2017), and the Old Gold Fellowship (2015), so as to mentioned some.

Gradual Slip
In Gradual Slip, a peristaltic pump drips water onto thermal electric cooling plates (TEC) to form mini “glaciers”. After a time of buildup the system shuts down and the plates role rapidly reverses. The plates heat up and the ice slides off onto a tray of dirt and seed. From this point the seeds grow into grass flourishing in the melt water or drying out in its absence. Here the natural element is coping with artificial stresses that are introduced by anthropomorphic forces. The natural environment has evolved into a system in equilibrium. In ecosystems there is a threshold, a limit where the system can no longer function when pushed beyond this boundary. Gradual slip acts as a model of a natural system, exploring this boundary, opening itself up for a dialogue around climate change.